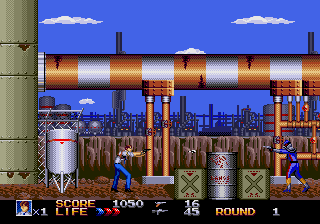 The game's plot is set around the same time period as its predecessor Rolling Thunder 2. With WCPO agents Albatross and Leila assigned to tracking down Gimdo criminal organization, a new Rolling Thunder agent codenamed Jay is assigned to track down Geldra's second-in-command, Dread (a green skinned humanoid resembling Maboo from the first game). Jay is assisted via radio by a contact named Ellen, who provides him with mission objectives. The story is presented in a more cinematic fashion than the previous games, featuring animated cutscenes between stages and on-screen text dialogue between the characters. There are only a couple of spoken dialogs in the game, all of which are synthesized voices.