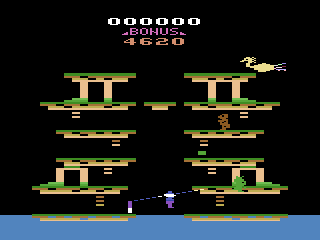 Is the Golden Roc merely a myth? Or does it really exist? Find out in Coleco's ROC'N ROPE, a game of skill and speed.

In your quest for the Golden Roc, you'll travel through a prehistoric landscape made up of hazardous ledges and treacherous cliffs.
Scale the heights with your trusty rope and use your powerful flashlight to daze the lumbering dinosaurs and the swift footed cavemen.
Fortunately, the Golden Roc has left a trail of magical eggs. Gather them as you go and use their powers to make the dinosaurs and cavemen disappear. But watch your step! If you slip while on the edge of a cliff, you'll plummet to the depths below!
The treasures of the Golden Roc are yours when you reach the summit. But you must journey on. The fabled bird awaits you at the top of another perilous climb!

Skill 1 is the easiest, suitable for play by beginners or younger players.
Skill 2 is a little harder. Enemies are more dangerous.
Skill 3 is a perilous journey. Your enemies are hot on your heels!
Skill 4 is the toughest challenge of all!