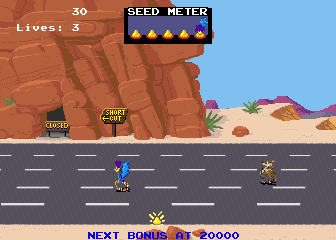 The player takes on the role of the Road Runner - from the much-loved Warner Bros. cartoon series - and must outrun and outsmart the villainous Wile E. Coyote, in this abstract side-scrolling racing game from Atari.

A variety of traps and pitfalls await the Road runner - including cannons, land mines and cliff-top drops - that must be carefully avoided or negotiated. It is possible, however, to lure Wile E. Coyote into these traps to put some valuable distance between the Road Runner and his pursuer.

Piles of birdseed are littered throughout the levels and Road Runner must eat them (by running over them) whenever possible, as missing five seed piles will cause Road Runner to feel faint and stop running, resulting in him being caught by Wile E Coyote. A 'Seed Meter' at the top of the screen indicates Road Runner's seed energy level.

Road Runner's colourful, beautifully-drawn graphics capture the spirit and humour of the legendary cartoons perfectly. The music and sound effects are also faithful to the cartoon series. 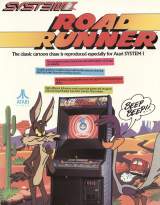