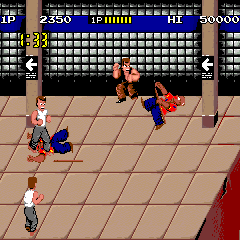 Western version of "Nekketsu Kouha Kunio-Kun [Model TA-0018]". The game's graphics were redrawn for the game's localization as Renegade to the game's characters and settings a western feel. The plot was also changed from beating up numerous gangs who are bullying the main character's best friend to rescuing the main character's girlfriend. Kunio, the main character in the Japanese, would return in numerous games including "Nekketsu Koukou Dodgeball-bu", the Japanese version of "Super Dodge Ball", some which underwent a similar localization process when they were released in the west (such as the NES game River City Ransom).