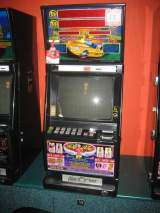 This game, along with "Indian Dreaming [Multi-line]", were originally released as 243 ways (Reel Power) games. Aside from the graphics and similar paytable, both Reelin-n-Rockin games are actually different games, most notably in this version, the scattered records pay anywhere on the screen even for just 2 records.

On some machines, the Reserve button is replaced with a Service button which is used to page a gaming machine attendant. This button is more commonly seen in casinos.

Reelin-n-Rockin Multi-line was released in June 2000.

This game is most noticeable for its 50's rock and roll feature jingle.

Unlike the original 243 Ways version, this game now has a 'Start Feature' button.

As of December 2007, an amendment to Victorian gaming machine laws saw this game banned from use across the state, as all machines are now required to have a player information button in place of the service/reserve button, reject $100 notes and have the automatic play feature disabled. In Victoria, this game was exclusive to Tatts Pokies venues only.

All pays are left to right except scatters which pay any.

Grill appears on reels 2 and 4 only and substitutes for all symbols.

During the free games the Grill substitutes are x2 and/or x3 respectively. If both symbols substitute in a win it is x6.

On the MKV version, you can't press anything to speed up the wins in the free games, but if you insert a coin the meter goes up by 25 or 100 depending on the machine, as the credit sound stops the music from playing.