The third in the Raiden Fighters series. This opus retains the same intensity and manic gameplay as its predecessors, while introducing several new mechanics. The game contains Normal, Special, and Expert game modes.

The soundtrack consists of fast-paced rave and techno music in a departure from the more melodic pop orientated style of the original Raiden game series. 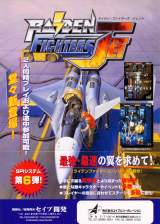