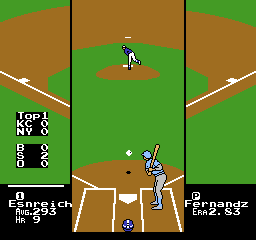 RBI BASEBALL first set the standard as the only baseball game for play on the NES to use real players and their stats. RBI BASEBALL 2 raises the standard to a new level: You get all 26 pro teams, each with a roster of 24 real players. Every player comes with his actual 1989 stats. There's instant replay, as well as new and improved animation, graphics, music and sound effects to make the game come alive. As the manager, you get the designated-hitter rule, switch-hitting, and your own lineup of starters and subs. It's so great, it's approved by the Major League Baseball Players Association!