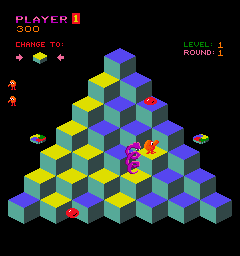 The object of the Q*bert game is to change the color of the top of the cubes to the Destination Color indicated at the upper-left corner of the screen (below Player 1's score) by hopping onto them. When all the cubes in the pyramid have been changed to the Destination Color, the screen will advance to the next round, with the player-controlled Q*bert character starting back on the top cube. At the beginning of each level, there will be a short demonstration cycle with Q*bert hopping around four cubes to explain to the player the play action of each level. Each level consists of four rounds. The current level number and round number is displayed at the upper-right corner of the screen (below Player 2's score in a 2-player game).

Gameplay starts with Q*bert appearing at the top of the pyramid. The joystick will move Q*bert from cube to cube by hopping in any of four diagonal directions. Q*bert can move anywhere on the pyramid, but jumping off will kill him. Hopping onto a rotating disk will take Q*bert back to the top of the pyramid. In the first two rounds of play, Q*bert will have to avoid touching the red and purple balls. These deadly objects drop randomly onto the second-from-the-top row of the pyramid and bounce downwards. The red balls will fall off the bottom, but the purple ball will stop at the bottom and hatch into Coily, the snake which chases Q*bert. To get rid of Coily, lure him to the edge, then jump unto a disk. The disk will take Q*bert back to the top and Coily will fall off, awarding 500 points and clearing the board of all other 'nasty' characters.

Starting at the third round of play, other 'nasty' characters come into play. The green characters or objects are safe to hop onto and will award points. All other 'nasty' characters are deadly to touch. In the third round the red balls will stop falling, but two purple characters named Ugg and Wrong Way will appear at the lower portion of the pyramid and travel sideways and upwards (Ugg is the one with the snout moving from right to left on the right face of the cubes, and Wrong Way is the one with the big eyes moving from left to right on the left face of the cubes). They will not chase Q*bert, but will move randomly to get in Q*bert's way. In the third round and every round after, based on an internal timer, a green ball will appear and bounce down from the top of the pyramid. Hopping Q*bert onto the green ball will award 100 points, and freeze all the 'nasty' characters on the screen for a few seconds, but 'Q*bert' will still be able to move to complete the color changes.

During the fourth round of play, two green characters named Slick and Sam will appear, based on the internal timer (Slick is the one wearing shades; Sam does not wear shades, otherwise their function is identical). They will drop onto the second-from-the-top row of the pyramid and hop randomly downwards. If they hop onto a cube that Q*bert has already changed the color of, the cube will change to a different color to thwart Q*bert. Hopping Q*bert onto Slick or Sam will stop them and award 300 points.

Throughout the remaining rounds, all the characters and objects will appear in random combinations with increasing speed.

During Level 2, the play action will increase in difficulty from changing the cubes to one color, to changing the color of the cubes twice. This means that each cube would have to be hopped on twice to change the pyramid to the Destination Color, completing the Round.

Here is a rundown of how all the colors change :

LEVEL 3 : When Q*bert jumps on S, it changes to D. When he jumps on D, it changes back to S. Q*bert must start again.

LEVELS 6-9 : Same color pattern as Level 5. The difference is the increased speed of Q*bert and the 'nasty' characters.

There are also bonus points awarded at the end of each round for successfully completing the round. The bonus for the completion of the 1st round is 1,000 points. This Bonus will progressively increase each Round by 250 points to a maximum of 5,000 points at Level 5. 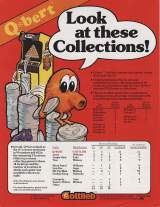