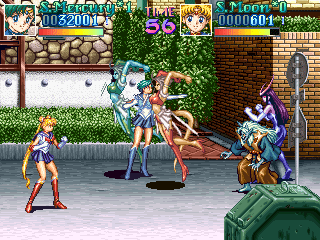 A 1 or 2-player sideways scrolling beat-em-up sees the Sailor Senshi fighting their way through five levels of anime-based combat. Each Sailor Soldier - chosen from a selection of 5, stiletto and mini skirt-wearing combatants - can punch, kick, jump, and throw their enemies; before finally reaching the traditional end-of-level boss.

As with Capcom's "Final Fight", and indeed many other games of the genre, items that aid the player are either dropped by beaten enemies or revealed after hitting certain obstacles and containers. Food can be used to replenish lost health and various trinkets can be picked up for bonus points. Finally, magic crystals can be found and are needed to activate the 'special attack' move. This works in a similar way to Sega's "Shinobi", with every enemy on the screen taking a hit.

Players must have at least one crystal to use the Special attack and up to 5 crystals can be carried at once. The more crystals the player holds when the special attack is utilized, the more effective it is against the game's enemies. Each level features its own unique, anime style animation. On level five, Sailor Soldier's signature attack move, from the original Japanese anime upon which the game is based, makes an appearance.