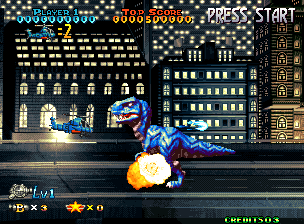 A side-scrolling shooter featuring helicopters and a great sequel to the previous game, filled with great details and good pre-rendered graphics combined with good sound effects.

The plot takes us this time in the future where they have been a series of attacks in some parts of the world, leaving destruction in its wake, all this is caused once again by a invasion of legions of dinosaurs, to control this disastrous tragedy, we resort to the army, who sends two of his best helicopter armed with high-tech weapons, with which it hopes to eradicate the prehistoric menace.

The players controls one of two types of helicopters, main difference is in the type of weaponry, both are re-powered by a series of power-ups which is obtained by eliminating the enemies, the Blue One has a wide and straight ahead shot and the bomb is a huge powerfull wave cannon and the Green One fires a spread shot and the bomb fires a multitude of grenades that eliminates effectively the enemies in front. There are to rescue and defend several civilians survivors of all the Jurassic army to earn points and power-ups to face the enemy boss of end phase and go the next level.