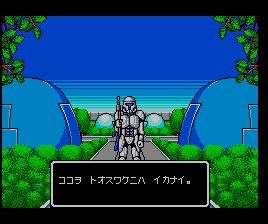 Role-playing video game (RPG). First installment of the series. Phantasy Star tells the story of Alis on her journey to defeat the evil ruler of her star system, King Lassic, after her brother dies at his hands. She traverses between planets, gathering a party of fighters and collecting the items she needs to avenge her brother's death and return peace to the star system. The gameplay features traditional Japanese RPG elements including random encounters and experience points. All the characters have predefined personalities and abilities, a unique element compared to the customizable characters of other RPGs of the era.