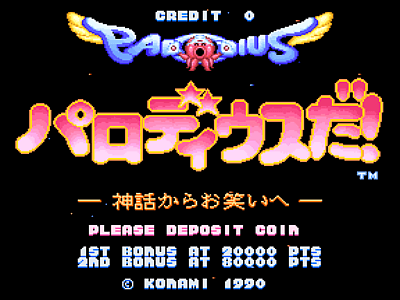 Parodius Da! is a horizontally-scrolling shoot-em-up in which the Great Octopus has threatened Earth. To help Parodius save the planet, the player and his friends must begin their search across the world to find the enemy and destroy him.

Parodius Da! was created as a parody of Konami's own "Gradius" series of shoot-em-ups but adopted a graphical style that was entirely its own; something that becomes evident at the very start of the game when players can chose to pilot either a penguin or an octopus rather that the traditional Gradius ship.

Parodius retains the selectable weapons system of "Gradius"; a 'power meter' at the bottom of the screen enables players to 'buy' weapons and upgrades using capsules left behind by certain destroyed enemies. Each collected capsule advances the power meter by one step. Players can activate the highlighted item at any point, after which the power meter resets. For this game, players can also choose to have weapons update automatically, with the game upgrading weapons simply by collecting the capsules.

Parodius Da! also allows players to pilot any one of four different characters: Vic Viper (from Gradius/Nemesis), Octopus, TwinBee and Pentarou. Another new addition is that of bell power-ups. These originally appeared in Konami's "TwinBee" series and act as one-time power-ups, allowing the player to destroy every enemy on screen, for example, or fire huge energy beams.

Enemies and environments from the Gradius games and TwinBee are mixed in along with a host of anime-style opponents, including scantily-clad women. Parodius' eccentricity and unique humour is further demonstrated soon after the game begins; as players face such enemies as a giant belly-dancing woman and a half-cat/half-boat creature.