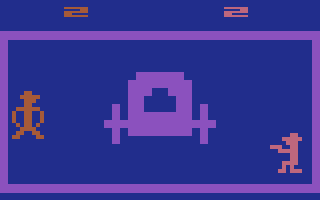 One or two players can become expert gunslingers during these games:
* In 1-player games (Target Shoot), you control the movement of a gunfighter with the left Joystick Controller. Practice target shooting with the moving target that appears on the screen.
* In 2-player games (Gunslinger Games), each player controls the movement of a gunslinger with a Joystick Controller. You score points when your gunslinger shoots your opponent's gunslinger.
NOTE: In all 1- and 2-player games, bullets will ricochet off the upper and lower playfield boundaries.