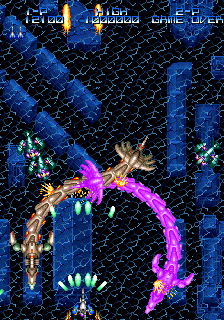 On July 1999, a nuclear catastrophe succumbed the planet earth in a absolute destruction and darkness, countries are underwater and ruined, only a few survivors have resisted the undermining and collapse of the humanity, two brave pilots will have the task of saving and defend the rest of world and help to rise from the ashes all the civilization.

Players control one of the two aircraft piloted by a male pilot named 'Dalas' and a female pilot named 'Joanna' and must shoot down hordes of enemies and avoid his attacks while pick up 'power items' to then defeat the level boss to advance to next levels.