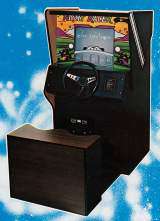 Night Racer is a game with a very interesting history. The idea for the game came to designer Ted Michon while he was in Germany working for Digital Games investigating problems with their Air Combat game. In a bowling alley, he saw a game called "Nürburgring 1" (after the German racetrack) that was the first he ever saw that attempted a 3-D effect. The game was a one-of-a-kind piece and Michon eventually met the designer and found that the entire game had been designed with analog components. Michon urged the designer to create a digital verison but was igored so he decided to design his own version. Before the game was released, Digital Games was sold and reopened as Micronetics.

Night Racer was the only game they produced (released just before Midway's "Midnite Driver"/"280 Zzzap").

Machine's picture.
All in Color For a Quarter - Keith Smith