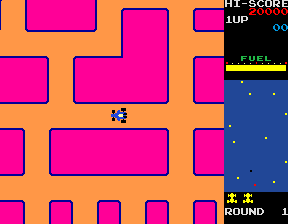 New Rally-X is a scrolling, overhead mazed-based racing game in which the player drives a racing car around a maze and must collect ten yellow flags before the car's fuel runs out. In-game opponents consist of red enemy cars that pursue and try to ram into and destroy the player's car. The enemy cars are faster moving than the player's vehicle.

The player's car automatically moves in whichever direction the joystick is pushed and if it runs into a wall, it will turn automatically and continue moving. To disrupt the chasing enemy cars a smoke-screen can be activated that trails behind the player's car, causing any pursuing vehicles to crash. Activating the smoke screen uses a small amount of fuel, however, so players must be careful to not overuse it.

Each maze also has rock formations and crashing into these will result in the loss of a player car. A radar display to the right-hand side of the playing area shows the relative positions of the flags, rocks and enemy vehicles.

In addition to the standard ten flags, each maze also contains a special flag (indicated by the letter "S"). If collected, the value earned for the round's remaining flags doubles from 100 to 200 points. If the player dies before the end of that round, the flag value is set back to 100 points and the double bonus is lost.

The mazes also contain a 'lucky flag'. This is marked with the letter 'L' and - providing there are still standard flags remaining - awards the player extra points for remaining fuel, after which the round will continue as normal. Upon completion of a round, bonus points are awarded based on how much fuel the player has remaining.

As players progress through the rounds, the number or pursuing enemy cars increases.

New Rally-X was released in February 1981.

While the original "Rally-X", released under a Bally/Midway license, was a moderate hit in North America, Bally/Midway only distributed this updated version as an upgrade kit for "Rally-X" cabinets. The game appeared quite frequently in mainland Europe and the United Kingdom, mainly in the form of uncredited bootlegs. It was at least as popular as "Rally-X" in these regions, if not more so, primarily due to the game's greater playability and abundance of bootleg board stock.

Differences from "Rally-X" :
* The graphics for the cars have been slightly improved.
* The game has new background music, which many players have found quite enjoyable.
* The stage layouts have been simplified in order to reduce dead ends that a player could become trapped in.
* The number of enemy cars that appear in each stage has been reduced.
* The addition of the Lucky flag.
* The position of the special flag is indicated on the radar by the blinking dot.
* By default, you now get an extra life at 80,000 points in addition to 20,000 points.
* The number of rocks and enemy cars is indicated before each Challenging Stage.

New Rally-X is used as a loading game in "Ridge Racers" for the Sony PSP; it can also be selected as a mini-game.

Collecting a flag : 100 points x the flag collected up to a maximum of 1,000 points (If you lose a life, the points awarded will reset when you start the stage over).
Special flag : Doubles points for the Special Flag and all flags collected thereafter until you clear the stage or lose a life. If you clear the round without losing a life, the last flag is always worth 2,000 points because it is guaranteed that at some point, you will have collected the Special Flag. However, losing a life will cancel out the Special Flag's scoring effect when you have to start the stage over.
Lucky flag : Normal flag points plus points for remaining fuel
End of round bonus : Points for remaining fuel

* Your only goal is to collect all ten flags as quickly as possible. You need to pay constant attention to two things: the zoomed in view of the world that occupies most of the screen, and the radar view of the world to the right.

* The radar view provides you with two key pieces of information: the relative position of the flags in the world, and the proximity of the enemy cars to yours. Yellow dots in the radar view denote the flags' locations, red dots represent the enemy cars, and the dot flashing black and gray represents you.

* The method you use for collecting the flags is of utmost importance. It is usually best to try to hop from one flag to whichever flag is closest, but the enemies will make that quite difficult to do. As a general rule, do not reverse your direction unless it is absolutely necessary and completely safe to do. If you have to choose between getting close to an enemy to pick up a nearby flag, and abandoning that flag for a farther flag, go for the farther flag. The more distance you put between you and the other cars, the safer you will remain.

* In general, you will be safe off if you choose a direction to collect flags, clockwise or counter-clockwise, and stick to it throughout the duration of the stage. The smokescreen is an invaluable and incredibly tempting tool to use. But if you use it excessively, you will deplete your fuel supply very rapidly, making it more likely that you will run out of fuel before you collect all ten flags, which will almost ensure your demise.

* Challenging stages occur before each maze change, which occurs on the third round and every fourth round thereafter. In these stages, you are free to collect all of the flags without being harassed by enemy cars until your fuel runs out. However, you can still crash into parked cars and rocks, so be careful.