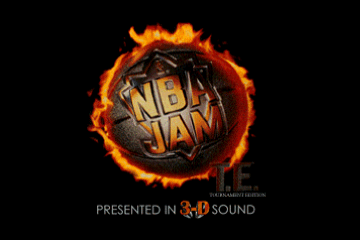 Cut loose, drive for the net, and give it all you've got! With NBA JAM TOURNAMENT EDITION, you're experiencing wham, bam, hoop action like you've never seen before!

NBA JAM TOURNAMENT EDITION lets you wham it and slam it with rim-rocking superstars like Scottie Pippen, Patrick Ewing, Dominique Wilkins, Hakeem Olajuwon, Anfernee Hardaway and Karl Malone! They're all here: The greatest superstars of the sport that has become the greatest game on the globe!

Blast off with the Rockets and the Blazers, display some roundball Magic and Heat, fly high with the Hawks and the Hornets! All 27 NBA Teams are represented as you take to the boards in one-on-one, two-on-two, or two-on-one competition!

Hit the hardwood with slams and turbo-charged Jams! Take the three-point shot from the far end of the court, or Jam it home from under your opponent's net!

You think you know the game?