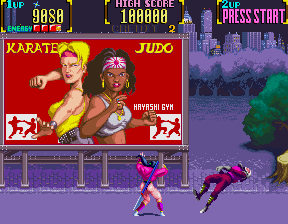 Mystic Warriors was released in February 1993.

The subtitle of this game translates from Japanese as 'Wrath of Ninja'.

The attract mode intro from "Sunset Riders" plays on the large theatre screen at the end of Stage 1.

The US version is slightly different, it has the "Winners Don't Use Drugs" screen.