Moon Cresta is a single screen shoot-em-up with the player controlling an armed ship that moves horizontally along the bottom of the screen and must use their ship to destroy waves of attacking aliens.

The player begins the game with a small ship armed with a single laser cannon. Upon successful completion of the first four waves of alien attacks, the player's ship will be able to dock with the next 'stage' of fighter ship, although the docking procedure must be completed within a set time. This larger, two-stage ship has increased fire power (three lasers).

After successfully clearing a further two alien waves and surviving a meteor shower, the two-stage ship will be able to dock with the third and final piece, giving the player the largest and most powerful ship, which is now armed with five lasers. Bonus points are awarded depending on how quickly the docking procedures are completed.

If the multi-stage ship is hit, the player continues with whatever stages remain. If players achieve a score of 30,000, they are awarded a free game and their score continues to accumulate.

Upon completion of the first eight screens, the player's ship will revert back to its small, single-stage incarnation and the game begins again with an increased level of difficulty. 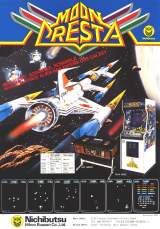