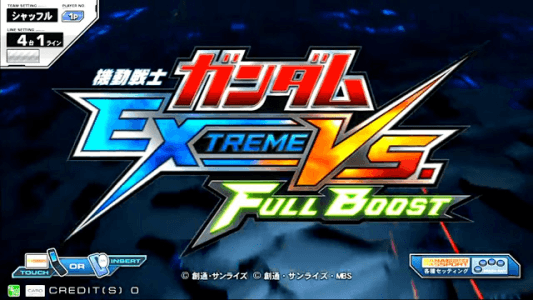 
Mobile Suit Gundam Extreme VS. Full Boost was then released on April 05, 2012 in the Japanese arcades.

1ST UPDATE
Release date: April 26, 2012
- Some minor changes will be implemented and a new mecha will be added: the RX-0 Unicorn Gundam 02 'Banshee' appeared in the Mobile Suit Gundam Unicorn series and operated by Marida Cruz. It's equipped with 6 different types of weapons.

2ND UPDATE
Release date: May 29, 2012
- It adds the CB-0000G/C Reborns Gundam operated by Ribbons Almark and coming from Mobile Suit Gundam 00 series broadcasted between 2007 and 2009. It's equipped with: Egner Whip, GN Buster Rifle, Large GN Beam Saber, Large GN Fin Fangs and Small GN Fin Fangs.
- A new stage will also be added: Africa Tower, a battlefield where all the buildings are destroyable.

3RD UPDATE
Release date: June 26, 2012
- A new mecha, a new map and a new Navi. The new mecha is the MS-08TX [EXAM] Efreet Custom driven by Nimbus Schterzen coming from Mobile Suit Gundam Side Story: The Blue Destiny trigoly out on Sega Saturn in September 1996 for the first episode, in December 1996 for the second and in March 1997 for the last one. This mecha has three weapons: Grenade Launchers Twin, 6-Tube Missile Pod, Heat Saber and it has also special attacks.
- The new map 'Manyupichi' is the same as in Extreme VS. but now the fights take place in the evening. Maureen Kitamura is the new Navi, she also comes from Mobile Suit Gundam Side Story: The Blue Destiny.