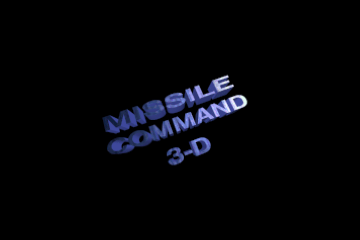 --------
ORIGINAL
--------
The colonies are in trouble! Unkown aliens and foreign countries are trying to destroy your cities and take over the world. Your job is to protect your citizens from hostile enemy attacks. Firebreathing dragons, electric eels and menacing motherships will try to stop you. But you've got missiles, lasers and smart bombs to hold off the enemy and keep your cities from becoming alien neighborhoods. Original Missile Command, 3D Missile Command and Virtual Missile Command are all waiting for your help to keep their worlds safe.

The aim of Original Missile Command is to use your three missile bases to protect the six cities from waves of missile attacks. Each base has 10 missiles. Enemy missiles appear at the top of the screen and fall towards the cities at the bottom, leaving a trail as they go. Use the Joypad to position the cross hair in the path of a missile, and press the A, B or C button to launch a missile from the right, middle or left base, respectively. Your missiles take a little time to reach their destination, so aim slightly ahead of the attacking missile. Your missile will explode when it reaches its target, and anything that hits the resulting explosion (except one of your missiles) will explode, causing another explosion. Often a missile will split into several other missiles, each aimed at a different target. Other hazards include enemy planes and satellites, which will fly across the screen and fire missiles at your cities and bases.

If a city is hit during a wave, it is destroyed. If a base is hit it is out of action and all its ammo is lost until the next wave. With each new attack wave, your bases get all their ammo replaced. When all the enemy's missiles in a wave are destroyed, bonus points are awarded depending on how much ammo and how many cities you have left. At the end of a wave, bonus cities are awarded for every 10,000 points. The game is over when all your cities have been destroyed and you have no bonus cities left.

------------------
3D MISSILE COMMAND
------------------
You have led your ship of colonists to a distant solar system to begin life on a new planet. Unfortunately, just as your people completed construction and have begun settling into a daily routine, this new system is invaded by aliens. These aliens, also looking for a place to inhabit, decide that this system is theirs and you and your people need to be exterminated.

With the aliens intent on your destruction, you must lead your colonists in the defense of your new home. Fortunately, your technology is almost as advanced as theirs, and your scientists continue to develop breakthroughs. But even with new weapons becoming available, the alien onslaught continues. Their numbers seem endless, and they are driven to destroy your colony to the last human being.

In 3D Missile Command you must defend your cities and defense bases against aerial bombardment by the alien fleet. To destroy an alien ship or missile, you must position the cross hair in the path of the target and press the A, B or C button to launch a missile from the right, middle or left base. When the missile reaches the targeted space, it, and anything within range, will explode. You can set up chain reactions of explosions and destroy several targets with one defense missile.

Alien attacks happen in waves. At the end of each wave your efforts and damage are evaluated. The bad news is that any city that was hit is destroyed, and any base that has been hit is out of commission. The good news is that for every 10,000 points you get a bonus city to replace cities that have been destroyed. And destroyed bases are regenerated and fully-loaded with ammo at the beginning of each wave. The game is over when all cities have been destroyed and no bonus cities are awarded.

-----------------------
VIRTUAL MISSILE COMMAND
-----------------------
The year is 2157. With the invention of the superluminal drive in 2034, the door was opened to interstellar travel, and humankind reached across space to colonize other worlds. One such colony, formed just two years ago, is now under attack from an unknown alien force. These aliens are capable of controlling the gigantic natural creatures of this world and turning them against the colonies. It is your job to protect the three main colonies on this planet - the undersea base, the cloud cities and the orbiting space station - and, hopefully, repel the aliens.

The aim of Virtual Missile Command is to protect your six cities from enemy attacks with the three missile bases surrounding the play area. Each of the player's three bases has two forms of attack: a laser (which is weak but will automatically hit anything in the player's sights), and missiles (which take time to reach the target, but can be exploded early to make enemy attacks hit the explosion). The bases and the cities can each take three hits by enemy missile. The game is over when either the player has no cities or bases left. However, you can repair and replace cities and guns using powerups.