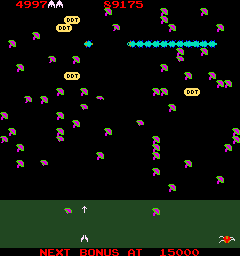 Millipede is a 1- or 2-player game with a color raster-scan video display. The game action takes place on a playfield filled with mushrooms, flowers, and deadly DDT bombs. The player tries to destroy a variety of insects that drop from the top of the screen or enter from the sides of the screen, most of them to attack the player. The player controls a bow-shaped vehicle called the Archer. The object of the game is to shoot and destroy as many objects as possible for a high point score, before the player's lives are all used up.

Player control consists of a Midi Trak-Ball control and a FIRE button. The Archer is moved by rotating the Midi Trak-Ball control. The Archer can be moved in all directions, but only within the bottom fifth of the screen. However, the Archer must move around mushrooms, flowers, and DDT bombs, since these are fixed and not 'transparent' objects. Pressing the FIRE button causes the Archer to emit an arrow that travels upward. The Archer may fire one or many arrows (by holding down the FIRE button constantly). But only one arrow will appear on the screen at a time.

A player may start a game at an advanced level of play and receive bonus points for starting play at that level.

Gameplay begins with a playfield of randomly placed mushrooms and DDT bombs. A Millipede enters at the top center of the screen and starts snaking its way across the screen. The Millipede changes direction when it runs into a fixed object in the playfield (mushroom, DDT bomb, or flower), or when it reaches the side boundaries of the playfield.

When a segment of the Millipede is shot, it is destroyed and a mushroom appears where that segment was shot. When shot, the Millipede breaks into two smaller Millipedes, each with its own head. When a Millipede reaches the bottom of the screen, it starts back up, but remains within the area of the Archer (the bottom 5th of the screen).

An attack wave is complete when all Millipede segments are destroyed. The screen then scrolls down one line. At the 9th attack wave, when the Millipede with only four segments enters from the top of the screen, the screen will scroll down every two seconds. The only way a player can stop the scrolling screen is to shoot a DDT bomb or destroy the entire Millipede.

It takes four shots to destroy a mushroom. After the fourth attack wave of each wave cycle, the entire playfield of mushrooms changes. Some mushrooms die and new mushrooms grow where there were none before. A mushroom next to a DDT bomb becomes poisoned (See Tips and Tricks below for complete details).

When a Millipede runs into a poisoned mushroom, two things happen: its head changes color, and it changes direction and falls vertically to the bottom of the screen.

Spiders appear in any round. They move in a random pattern on the bottom third of the screen. As the player's score increases, the range of the Spider decreases, until it is confined to the bottom fifth of the screen. Also, more Spiders enter as the game progresses. A Spider destroys any mushroom or flower it moves over. Depending on a special option switch setting, the Spider moves slowly until a player reaches a specific score, and then it speeds up. If the Archer and a Spider collide, both are destroyed.

When a Millipede with fewer than eleven segments appears, an Earwig enters the screen from either side, moving at a relatively slow speed. As the player earns more points, the Earwig's speed increases. If an Earwig passes over a mushroom, it poisons the mushroom.

When a Millipede with fewer than ten segments appears, a Dragonfly enters at the top of the screen. The Dragonfly moves in a zig-zag pattern and its speed increases as the player's score increases. As the Dragonfly moves, it leaves a trail of mushrooms behind.

When a Millipede with fewer than nine segments appears, a Mosquito enters at the top of the screen and flies in a diagonal pattern. The Mosquito's speed increases as the player's score increases. When a Mosquito is destroyed, the screen scrolls up one row.

Beetles appear randomly after the first wave. They enter from the sides of the screen near the bottom, travel down to the bottom of the screen, and walk at least half way across the bottom. Then the Beetle travels up and exits at the side of the screen. If a Beetle passes over a mushroom, the mushroom changes into a flower. Flowers cannot be destroyed by the Archer's arrows. Depending on a dip switch setting, the number of Beetles appearing on the screen and the speed of the beetles increase as the player's score increases. When a Beetle is destroyed, the screen scrolls down one row.

Bees may fall from the top of the screen during any round. As the Bee falls, it leaves a trail of mushrooms behind. The Archer must hit a Bee twice to destroy it; the first shot just speeds it up.

An Inchworm may appear when a Millipede with fewer that eleven segments appears. The Inchworm travels from one side of the screen to the other side. It moves slowly until the player's score reaches 80,000 points. Then it speeds up. If the Archer destroys the Inchworm, all insects will slow down for about three and one-half seconds.

After a Millipede of one, three, five, seven, or eleven segments has been destroyed, an insect bombing raid occurs. A raid may have only Bees, Dragonflies, Mosquitoes, or a mixture of all three. 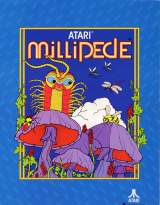