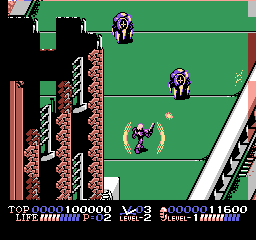 Max Warrior is a 3-D/isometric shooter by Kid and published by Vap. The player takes control of Max Maverick, a lone warrior on a mission to save his native world from a ruthless alien invasion. Everyone has evacuated the planet but Max believes he can penetrate the enemy lines and overcome the aggressive incursion despite the overwhelming odds against him... Max has two mains weapons at his disposal; the first is a Focusing Laser (L) that shoots forward and back at the same time, and the second is a Spread gun (W) that shoots in multiple directions at once (The player switches weapons by pressing 'Select' at any time during the game). Our warrior can also throw bombs in a close vicinity while performing double-jumps. Items scattered throughout the game increase the power of the bombs or any of the main weapons up to five times. Other special items activate protective barriers, speed ups, health modules or bonus points. Finally, Max doesn't always fight on foot and is just as keen to ride into battle - some levels enable him to fly a futuristic hover-bike and a fast hovercraft. Max Warrior features six stages (and an unlockable bonus stage) and a password system allows the player to pick up and continue his game at a later time.