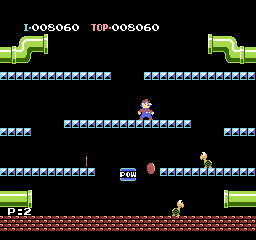 Text from this version:
You'll need lightning-fast reactions to get out of this pipeline adventure alive!

Mario and Luigi are doing some underground plumbing when all sorts of weird creatures come flying out of the pipes. Turtles, crabs - even fighterflies - attack the helpless Mario Bros. It's up to you to kick, punch and knock out these sewer pests before time runs out! But beware. Just when you think you got rid of them, they come back for more! Play against the computer, or with a friend - either way, this is one underground classic you'll want to play time and time again!

Even if the title screen says 1983, Mario Bros. for NES was released in June 1986 in North America.