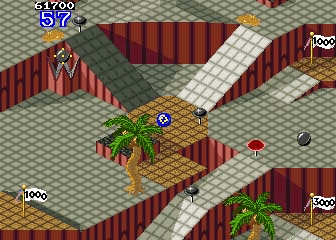 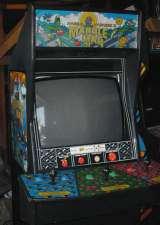 "Marble Madness" was an arcade video game designed by Mark Cerny, and published by Atari in 1984. It was a platform game in which the player must guide an onscreen marble through six courses, populated with obstacles and enemies, within a time limit. A sequel titled Marble Man was planned for release in 1991, though Cerny was not involved in the development. Development was led by Bob Flanagan who designed the game based on what he felt made Marble Madness a success in the home console market.

Because the market's demographic was a younger audience, Flanagan wanted to make the sequel more accessible and introduced a superhero-type main character. Marble Man expanded on the gameplay of the original game by featuring new abilities for the marble such as invisibility and flight, included pinball minigames between sets of levels, and allowed up to three players to traverse isometric courses.

Flanagan intended to address the short length of the first game and, with the help of Mike Hally, developed seventeen courses. Atari created prototypes for location testing, but the game did not fare well against more popular titles at the time such as "Street Fighter II". Atari assumed the track balls accounted for the poor reception and commissioned a second model with joystick controls. Because the new models were met with the same poor reception, production was halted and the focus shifted to Guardians of the Hood, a 2-D beat'em up game.