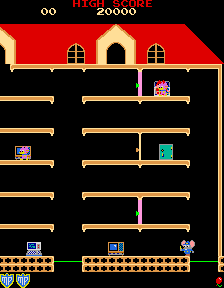 You are Mappy, the brave mouse policeman. Mappy's mission is to retrieve all of the stolen treasure from the Mewkies cat gang. They've stashed all of the loot in their leader's mansion which contains several floors, and numerous trampolines that the Mewkies like to use to travel between stories. Mappy must keep away from the cats and collect all items in the house before moving on to the next house. If Mappy is caught by a cat, he loses a life. Mappy also loses a life if he crashes to the floor by breaking through a trampoline or falling into a pitfall. When all of Mappy's lives are lost, the game is over.

Houses have six floors, and some houses in later rounds have an attic. Mappy gets to the different floors by jumping on a trampoline. Mappy can jump three times on a trampoline, but the fourth time will break it. Once Mappy moves onto a floor, he can jump on the trampoline another three times.

When Mappy jumps on the trampoline, he will go to the top floor of the house unless you push the joystick left or right to move him onto a particular floor. You can move Mappy onto a floor as he's on the way up, but not on the way down.

Nyamco, the boss cat, does not chase Mappy. Instead he moves around in a zigzag pattern. He also like to hide for a few seconds behind a treasure.

The cats are very sneaky and, if given half a chance, will try to corner Mappy at the end of one of the platforms or to trap him on one of the floors he must use to get to the treasures he's after.

The cats have no defense mechanisms of any kind. But they cannot be permanently eliminated either. As soon as Mappy puts one cat out of commission, another cat appears somewhere else in the house.

However, in an emergency, you can slow one cat down for short periods of time. This is accomplished by having Mappy throw open a standard door in the cat's face to knock him down and stun him. When hit by the door, the cat will be stunned for several seconds. When he is disabled like this, Mappy can walk right by him and not get caught. To temporarily eliminate more than one pursuer at a time, Mappy must catch them in the microwaves emitted when opening power doors - the thick flashing doors that flicker with different colors.

As your skill level increases, the number and direction of pursuers coming at you at any one time and the speed with which they move, is gradually increased; plus, their pursuit patterns become more and more devious while their overall accuracy is highly improved.

Bonus lives are awarded to you periodically throughout the game as you reach or pass certain preselected point values ('Extra Lives' dip switch).

Once all the treasure in the house has been retrieved, you move on to the next house.

Mappy ("Micro Police") - This is you, our hero and defender of justice, the police-mouse who is on the case to recover the stolen loot from the enemy cats.

Nyamco ("Boss The Big Bit") - Does not chase Mappy, but moves around the house in a zig-zag fashion

Gosenzo - This appears when Mappy moves throughout the house for a long period of time without retrieving any stolen items. Once it appears, Mappy has no chance of escaping.

Doors - When Mappy is directly in front of a door, press the Door button to open the door. Doors open in the direction of the doorknob. Mappy cannot go through a closed door; you must open it to go through.

Power Doors - These flicker with different colors and are thicker than the ordinary doors. When you press the Door button, the door opens and sends a microwave that flushes away Mappy's feline pursuers. There are four power doors in each house.