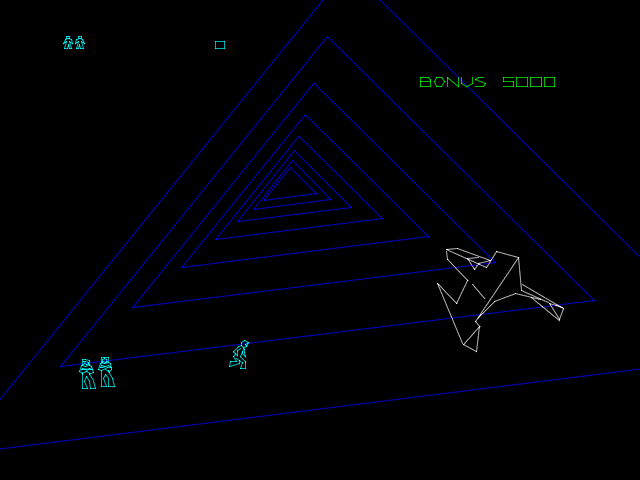 Major Havoc is a vector-based shoot-em-up and platform game in which the evil Vaxxian Empire overran the galaxy many years ago. Most of humanity was enslaved and abducted to the Vaxxian home world, although a few human scientists managed to escape. The Vaxxian Empire has long since collapsed but numerous Vaxxian space stations, all blindly controlled and defended by robots, still remain in the galaxy, mindlessly following their original, pre-programmed orders.

The small band of scientists who initially escaped have cloned the great human hero, 'Major Havoc' and tasked him with flying his 'Catastrofighter' through a wormhole in space so that he may lead a clone army against the dreaded Vaxxian robots and to liberate the remnants of humanity by destroying the enemy reactors. The player controls Major Rex Havoc, the leader of this band of clones.

The game is broken down into two distinct gameplay genres. The first is a shoot-'em-up in which the player controls Major Havoc's spaceship against the numerous robot ships that defend the enemy reactors. The ships are encased in a force-field shield which must first be shot and depleted before the ship itself can be destroyed.

The second section is a platform/maze game in which the player - after first landing on the space-station by centering their ship between a moving white line - enters the station. The object here is to reach the core of the station and sabotage its reactor by setting an explosive charge. Once the charge has been set, the player must quickly escape back to their ship and and reach a minimum safe distance before the space-station explodes.

The Space-station has reduced gravity, making Major Havoc react slowly to players' input. Each station has a maze-like layout and red arrows guide the player towards the station's core. Once the charge has been placed, more arrows guide the player to the station's exit. The mazes of successive space-stations become more complex and harder to navigate as the player progresses. Players also have a limited amount of oxygen in a station but more can be collected by running over the 'O2' symbols scattered throughout the maze.

Major Havoc features a warp system that allows players to skip levels and gain bonus points or extra lives. The warps are activated by a utilizing a Breakout-style mini-game at the bottom-right corner of the screen.

The mini-game is available at the start of each wave and the way it works is this: a two or three-digit number is displayed and players must move the controller until the number matches the one required to warp. For example, the RED WARP requires the number '23', so the player must move the controller left or right until the first digit matches '2', then must press the fire button. The Breakout game begins and must be played while moving the joystick to the '3'. Once players have successfully entered the warp code, they are transported to a higher level. 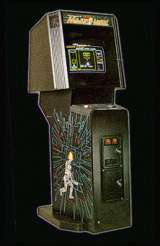 Major Havoc was released in November 1983.

New Features :
* High-Tech Game Cabinet : A new video arcade game cabinet design delivers high visibility and increased player attraction.
* Roller Control : The backlit roller control provides left-to-right and right-to-left directional movement.
* Multi-Layer Printed-Circuit Board : This state-of-the art design printed-circuit board (PCB) provides low system noise with high system reliability.
* Game Within a Game : Action occurs in the lower right corner of the TACTICAL SCAN. Breakout can be played for a few seconds before the actual Major Havoc game play starts. Earn a bonus life here!
* Dual FIRE/JUMP Button : This dual-action button allows Major Havoc to jump in the maze sequence and to fire at enemy robots in the space wave.
* Add-A-Coin : This feature permits you to start a new Major Havoc game at the level where you last saw the TACTICAL SCAN in your previous game play.
* Secret Warp Code : The code feature rewards you for short game times as it advances to deep levels in game play. Use the roller control to dial in secret code numbers during the TACTICAL-SCAN wave.

Gameplay innovation at its finest. A game that would have done greater numbers had anyone cared in 1984. Only 300 dedicated machines were manufactured. Original price was $2,095. If Owen had done Major Havoc in a raster version, which was suggested, it would have sold 10 times as many. But unfortunately... the operators were getting very angry at vector games for failing all the time.

Mark Cerny came in the middle of the design, adding one of the space waves (the flying fish) and the last four base ship mazes. He also added some objects to the mazes (such as the gun and floating boots) and helped clean up old items that never got shipped.

The original name for the game was "Tollian Web", from the Star Trek episode The Tholian Web - an episode that also provided the inspiration for the unreleased "Ms. Gorf". Later titles included "Alpha One" and "Major Rex Havoc" (which was dropped when Atari discovered an underground comic with a similar name).

Ettore Ciaffi holds the official record for this game with 1,940,078 points.

A hack of this game is called "Major Havoc Return to Vax".

A Major Havoc unit appears in the 1983 movie 'WarGames'.

In space, faster completion of each wave awards more bonus points at end of wave.

Clearing all of the bricks in the breakout game awards an extra life.

* Warp Codes : It's possible to warp to higher levels in Major Havoc from the start of the game by using certain codes. This is useful to not only be able to get through the game more quickly, but each warp also gives a fairly hefty bonus for carrying it out. This is done by playing the mini-Breakout game at the bottom right-hand corner of the screen when the game starts. The game will have a phrase such as, 'Enter Red Warp 00' at the bottom of the screen. What you do is use the controls to 'dial in' the first digit of the appropriate code given below, then press the Fire button to serve the ball and repeat as necessary. The codes are :
Red code - 23, 250,000 points, Level 4.
Yellow code - 46, 600,000 points, Level 9.
Green code - 824, 700,000 points, Level 10.
Aqua code - 315, 950,000 points, Level 13.

Note that you can only enter the codes in the order they're given - it's not possible to enter, say, the red warp code followed directly by the aqua warp code.