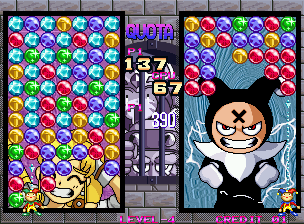 More characters, more gameplay modes, more frantic gameplay, more fun! This is what every videogame sequel should be, and the sequel to one of the best puzzle games for the Neo-Geo MVS is indeed a game not to be missed! Lots of fun for one or two players!