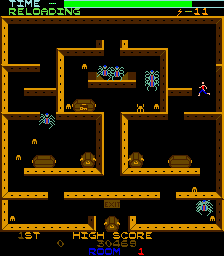 A shoot-em-up set in an ancient, South American pyramid, in which the player must explore a large number of single rooms in the search for treasure. Each room is filled with enemy creatures that must be killed or avoided. The player is equipped with a limited amount of whips and must collect as many items of treasure as possible.

The player is presented with options throughout the game, depending upon which rooms they wish to enter. Once a path is chosen, players must pick up treasures, kill all the monsters in their way, find the key and exit the room as fast as they can; avoiding the potential of setting off an earthquake. Upon exiting a level, the player is presented with a hallway which shows a number of doorways allowing access to any one of several different rooms. This allows players to pick their own route through the game, but the decision which room to tackle next must be taken quickly as players must reach their chosen room quickly or risk being attacked by a flock of screeching birds.

The player's character is armed with an eight-way firing gun (in a similar fashion to Williams' 1982 classic, "Robotron"). In addition to the gun, the player is also equipped with three whips, which can be used to either kill attacking creatures or to knock down any walls that bar the player's progress. Players are given the opportunity to purchase additional whips at the interludes between levels; this is done by inserting an extra credit into the arcade machine and pressing the relevant button.

Treasure must be constantly collected in order to stay alive.