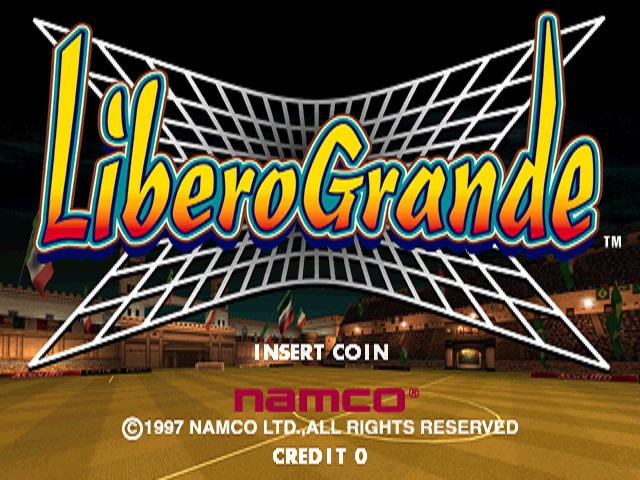 A very unique soccer game to say the least. In this game, you control just one player in the team - the star player!

Libero Grande was released in October 1997.

The title refers to the 'Libero' position : the 'Libero' position was popularized thanks to German legend Franz Beckenbauer in the 1970's. At the 1990 World Cup, in Italy, even the Brazilian squad employed it for the very first time. Outraged Pelé severely criticized the national head coach Lazaroni as Brazil was eliminated early in the tournament. Conversely, at the World Cup 1990, Germany finished first while playing with a libero. Since Italy 1990, many teams have abandoned the use of the libero excluding many German and youth clubs. It's now evident that some teams are just not suited to play with a sweeper. The sweeper must always be 'the last player in defense'. His job is to close down gaps left by other defenders. The libero roams laterally, a few meters behind the last line of fullbacks (although he tries not to sway too far towards the flanks). He analyzes the development of plays, anticipates where open angles and passing lanes are forming and makes quick decisions about dealing with them. At times, more than one issue will present itself simultaneously thus making the sweeper's job even harder. Because they never mark enemy attackers, sweepers can move a great deal forward when their team is in possession. This frequently finds the enemy defense unprepared. When an unmarked player is unexpectedly introduced to a play, the opposite defense is faced with tough choices. Overall, the sweeper should be very perceptive (usually experienced) with good ball handling skills and confidence.