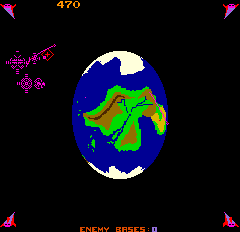 The Liberator controls consist of a trackball, fire button, and shield button. The player controls a coordinated attack from four star ships at the corners of the screen. The primary target of the attack are enemy bases on a rotating planet in the center of the screen. The trackball is used to move a cross-shaped cursor. The fire button fires a missile at the cursor's location from your closest ship. The shield button is used to activate force fields around the ships. The shield can only take four hits each round, and the count is shared between all ships.

At the beginning of each level, the player is flying through outer space and spaceships fly on screen from the left and right and leave in an arc. They try to ram into your ships. Note that shields do not work during this stage.

After this stage, the player is taken to a view of a rotating planet. The most prominent enemies are red flashing missile bases. They shoot missiles, fireballs, and star balls at your ships. The enemy bases can also detach from the planet, turn into satellites, and orbit the planet while shooting missiles. Once all missile bases are destroyed, the player moves onto the next level. At higher levels, there is the white master base. It is very intelligent, and it can change the direction or speed of the planet rotation to avoid getting hit. 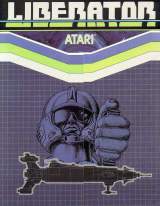