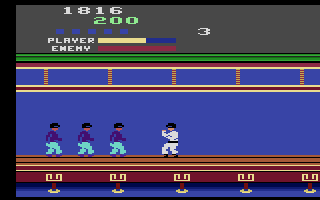 The lovely Princess Victoria is being held captive in the Evil Wizard's temple. As the Kung-Fu Master, you're the only one powerful enough to rescue her.

The temple itself wouldn't pose that much of a problem. Except that it has five different levels. And each one is crawling with a tireless army of enemies.

Using your superb martial arts skills, you'll have to oust henchmen, knife-throwers, dragons, and a slew of other not-very-nice types.

If you manage to clean out everybody on a level, you'll automatically go to the next level. And your energy meter and timer will be reset.

Once you succeed in rescuing Princess Victoria, you'll be sent back down to the first floor for more kicking and punching and jumping. Only this time things will happen even faster and more furiously.

Note on two-player games: In a two player game, play alternates whenever a player loses a life. The second-player's timer, score, and energy bar replace thos of the first player, and so on. If one player loses all of his lives, the other player continues without interruption until the game is over.