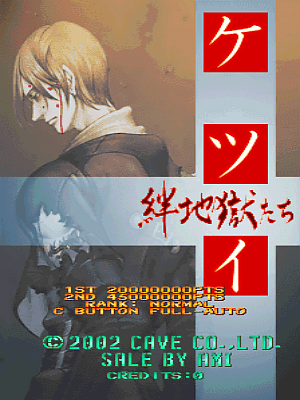 The continuous industrialization that started in 1900, finally led to unavoidable consequences in the middle of the 21st century. The waterlevel rose worldwide and threatened many coastal countries. So the shorelines had to be modified In order to save the human civilization from drowning. It was a time of great confusion about the future, and nobody thought about war. Well, almost... There was one company called EVAC corporation, who made a great profit from underhand productions and exports of weapon systems. When the United Nations discovered their illegal trades, they pointed EVAC to the global ban of weapon imports and exports, and asked them to stop their productions and to destroy their weapon facilities immediately. EVAC rejected all accusations and refused to take any actions. So a preventive war was started by the United Nations to stop the EVAC corporation.

Ketsui was released in January 2003.

Developed/Produced by Cave and Sales by AMI (Amusement Marketing International).

* High Scoring : The key to high scoring is moving up close (VERY close) to your enemies and blasting them for point boxes labeled 1 through 5 (Five is worth the most, of course).

* Lock-Shot Properties: With Lock-Shot active your helicopter will move slower. You start with 2 pods, one on each side of the helicopter. each can lock onto a target. After powering up twice you will gain 2 more pods (total of 4) and have the ability to lock onto four separate targets. Usually you just have all pods lock onto one target for max damage. You do NOT do more damage closer to enemies. However, when closer, you lock on faster, and less enemies will be in the way of your pods and the target, so you will end up dealing more. Your Helicopter will shoot a beam out in front. It CANNOT reach full screen! You will see it end at about 3/4 from the bottom. The Beam DOES do damage, albeit very little, but it can add up. Lock-Shot will lock onto enemies quicker the closer you are. It will not let go until you release A or the target is destroyed. During Boss Battles, it is quicker to hold C, wait just until the Boss can be damaged, then hold down A. You have to be close for this. Enemies will drop more Chips when Lock-Shot mode is active. You must get in the habit of keeping Lock-Shot HELD DOWN even after an enemy is destroyed, because there are several that will continue to drop boxes even after death or explode multiple times.

* The Score Bar:
- 1st Row: Multiplier Overall Counter. Multiplier used in [after] the boss fight. It's the total sum of all chips gathered up until the boss fight. Unless you die, it will not deplete until the boss fight.
- 2nd Row: Multiplier Counter (1-999).
Multiplier used in stage. Grows as you gather Multiplier Chips, but depletes as you use your lock shot, and if you die.
- Multiplier Chip Rate: The type of chip you get when you kill enemies with the lock shot. When the Multiplier timer reaches 0, it'll be reset when you kill an enemy with your normal shot, and is valid until the timer reaches 0.
- 3rd Row: Current chip NUMBER (1-5). Measures the time the chip rate is valid. Will rise as you kill enemies with the shot or lock shot, but the chip rate will return to 1 when the timer hits zero. The multiplier is raised as you gather multiplier chips. Basically you need to remember that killing an enemy at close distance produces are larger chip. Conversely, what depletes the multiplier is destroying enemies with the lock shot. Depending on the type of enemy, they can take off up to 1/30 to 1/10 of the entire value (popcorn enemies deplete it by a small amount, whereas bosses deplete it by a large one). If you die, it will decrease by 1/4.
- Characteristics of the multiplier at the boss fight: Unlike points 1 and 2, during the boss fight, the value of the overall multiplier counter is applied straight up. However, there's few chances to raise it during the boss fight, and it will quickly deplete as time passes. Certain bosses are better to ignore their parts and just kill quickly.

* Boss form change timing: you want your bullets from Shot to destroy the boss, but be able to get into Lock-Shot mode. I get the bosses life bar just a bit before the form change. You must get the feel.
These are for 1P.
> 1st Boss: between N and S of INSERT COIN
> 2nd Boss: between S and E of INSERT COIN
> 3rd Boss : the 1P score in the middle of the 100s place
> 4th Boss: First Form: Between N and S of INSERT COIN. Second Form: The 1P score between 1000 and 100.
> 5th Boss: First Form: There is no marking to indicate, if you constantly damage him with Lock-Shot, it is when he returns to his first pattern. Second Form: The 1P score at about 10,000. I don't look at this, it is during the second time of his final attack.

* Loops requirements:
- NORMAL "TSUUJOU" LOOP - Total DEATHS + BOMBS => 6
> Instead of releasing chips, enemies release Suicide bullets.
> Suicide Bullets are PINK.
> Chip Number is ALWAYS 1.
> You can stop suicide bullets from being released (seal) by being within a certain radius of enemies.
> If suicide bullets are sealed, then no chips are gained.
> Difficulty is drastically increased.

- SPECIAL "URA" LOOP (AKA REVERSE LOOP/SIDE) - NO MISS/NO BOMBS, 120+ Million Score
> A text message is given "WELCOME TO THE SPECIAL ROUND" before starting.
> Suicide bullets are BLUE.
> There is a greater number of suicide bullets and they are quicker.
> The distance which you can seal suicide bullets is decreased.
> When suicide bullets are sealed, the number that was due to be discharged will be added to your multiplier (I will figure it out exactly as I get there)
> The rate of decrease when an enemy is destroyed with lock-shot is decreased.
> During Boss Battles, the reduction speed of the Total Multiplier Overall Counter is slowed.
> End of round bonus DOUBLES.
> During the 5th Boss, after the second form is destroyed, DOOM will appear.