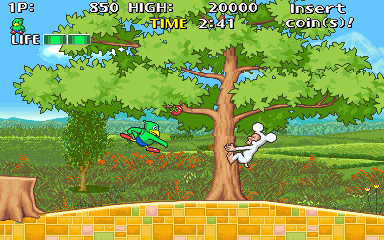 J.J. Squarkers is a scrolling run 'n' gun platform shoot-em-up for one or two players in which several residents from the peaceful village if Pistachio have been kidnapped. Most of the remaining villagers have fallen under a mysterious spell, making them violent. Players take on the roles of two ducks called 'Ani Karasukun' and 'Ototo Karasukun' who set out to defeat the enemy minions and restore peace to their village.

The ducks can fire projectiles to defeat the abstract enemies they face, with their default weapon being tomatoes. Other weapons - as well as bonus and health power-ups - become available when certain enemies are killed. Available weapons include pumpkins, watermelon seeds, screws and slinkys wearing red sneakers.

Each weapon has different strengths and weaknesses; for example the slinkys simply walk in a straight line until they either meet obstacles or the edge of screen, making it easy to deal with enemies from a distance. On the other hand, watermelon seeds can only be thrown a short distance but several are thrown at once. This effectively gives players a 'spread shot' and is more effective when multiple enemies are attacking from several directions at once.

J.J. Squarkers consists of five stages with a powerful end-of-level guardian waiting at the end of each.