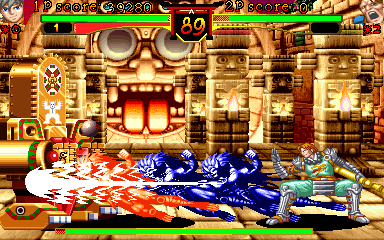 Developed by Pandorabox. In'nin The Ninja Master was Released in November 1995 in Japan by Banpresto. It is known outside Japan as "Metamoqester".

The game is an off shoot of the, then popular, In'nin series of RPGs by Pandora Box, stretching across the Game Boy, Super Famicom and PlayStation.

The symbols that appear on floating balls in the attract mode are Siddham, a writing system used in Japan for writing Buddhist mantras and sutras in Sanskrit.