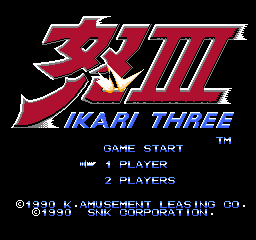 Ikari III is an action game by KAC and conversion of the arcade game of the same name originally released by SNK in 1989. The 'Crime Ghost', a secret organization led by the ruthless and megalomaniac commander Fausuto (aka 'Faust'), is poised to take over the world. In their pursuit of global domination, they have kidnaped the president's daughter and threaten to kill her if he doesn't step down from his position. His only hope is to summon the Ikari Warriors, and to convince them to rescue Erisu (aka 'Elise') from the enemy organization. Ikari III follows a radically different approach than its predecessors - both Ralf and Clark use their fists and feet as their primary weapons instead of their trademark machine guns and grenades. Thus, the meat of the game is to fight off swarms of enemy troops, and to throw combination of punches (A), kicks (B) and jump kicks (A+B) at them. However, the warriors can still collect temporary weapons along the way, all of which have very limited ammo (10 shots for the machine gun and a single throw for the grenades). The machine gun does a come-back during some of the boss battles though, and the player is granted unlimited ammunition until they finally bite the dust. Ikari III features six levels, exclusive cutscenes and a two simultaneous player mode. 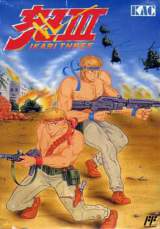