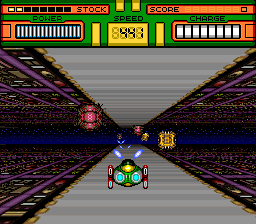 HyperZone is a sort of 3D shooter by Hal Laboratory. The player takes control of a playing ship and the goal of the game is to reach the end of each stage and defeat a big and mean boss. The originality of the game is to offer the player a 3-D view intensively using Super Famicom's System 7. The view is from behind the ship, scenery and enemies scaling and rushing towards you. The game counts many stages and each of them sort of follow the same there, from a Cyber City in the first stage to lava lake and under water scenes in later levels. Other ships can be unlocked along the game, each of them having their own weapons and special attacks. Those attacks can be charged up by holding the fire button during the game (not available on the first ship). A good originality is that the status panel on top of the screen will also change when you switch to another ship. The game, even is you can control the speed, forces you to stay in the same ballpark. Go too slow and you'll get damaged.