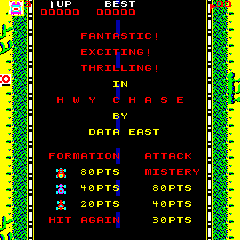 A "Galaxian" type game. Shoot the flashing car (alien) on the screen the clear the level.