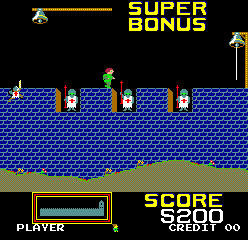 Hunchback is a classic and much-copied platform game in which the player takes on the role of the eponymous bell-ringer, Quasimodo, in his quest to rescue the beautiful Esmeralda from the tower of the castle fortress.

To reach Esmeralda, Quasi must run and jump through a number of screens - each representing part of a castle wall - to reach the tower and complete his rescue. Each screen presents the player with a different set of platform-based obstacles. These range from spear-toting guards, to ramparts and fiery chasms (the latter of which is cleared by carefully timed jumps onto and off a constantly swinging rope).

Most of the game's screens also feature projectiles - in the form of fireballs and arrows - that must be avoided. These can appear from both the left and right-hand side of the screen and can be moving at one of two different heights and speeds. Some of the trickier screens contain more than one of these projectiles and contact with either a projectile or guard will result in Quasi falling from the castle wall, resulting in the loss of a player life.

To complicate matters further, each screen must be completed within a strict time limit. This takes the form of an enemy guard climbing the castle walls; if the guard reaches the top of the wall, he will walk towards Quasi to burn the Hunchback with his torch. If Quasi rings the bell before the guard has scaled the wall, a bonus score is rewarded. If five screens are completed without a life being lost, a 'Super Bonus' is awarded.

A meter at the bottom left corner of the screen - displaying a cutaway of castle ramparts - shows Quasi's progress towards the tower and his beloved Esmeralda. Upon reaching Esmeralda, players must complete a bonus screen - involving using moving ropes to collect bells from a series of platforms - to complete the rescue.

Once completed, the game starts over with a much higher level of difficulty and tighter time limits.