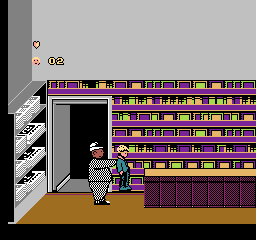 Guess who's all alone again... only this time in the biggest metropolis of them all - New York City! Help Kevin McCallister in his newest comedy adventure! Marv and Harry bring reinforcements this time to nab the kid that sent them to jail. As Kevin, you'll collect assorted toys and items to blast your opponents right out of action and into early retirement! This time it seems a whole city is out for Kevin. Voracious vacuum cleaners and mean house detectives chase him through a posh hotel. Watch out for nasty gang members in Central Park and beware of holes in the floor of his uncle's townhouse - all the while looking out for a dangerous reunion with the Wet Bandit Gang! Now you can show them what "just a kid" can do!