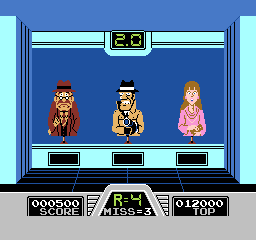 You need split-second timing and sharp-shooting accuracy to join the FBI. Have you got what it takes? Prove it! Use your Zapper light gun to shoot the gangsters in the FBI line-up, without hitting the innocent bystanders. Hit the gangsters and you'll score enough points to move to the next location: Hogan's Alley. Here's where the going gets rough. The gangsters pop in and out of windows, doorways and shadows, and are visible for a shorter amount of time. Beat the gangsters this time around and you'll move to the Trick Shoot round. How long can you keep the tin cans hopping in the air? Keep them up there long enough and you'll score enough points to become a full-fledged Agent in this exciting Nintendo Light Gun game!