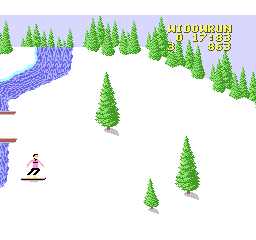 Speed down the slopes at up to 50 mph on a single board -- without poles! The HEAVY SHREDDIN' Video Game puts you there. To survive your runs and ride the half-pipe, you'll need to master stunts like mule-kicks, hand-plants, mid-air 360s and rocket-tweaking toe grabs. But keep your eyes on where you're headed, because there are obstacles out there, ready to rip you up. So come on all you shredders, get on board!

"The realism of HEAVY SHREDDIN' is uncanny.... Nintendo and snowboarding freaks everywhere will be addicted to this game." -- Wily Asher, Senior Editor, International Snowboard Magazine

-Jump the raging river...
-A mid-air 360 in the half-pipe...
-Perform a gnarly airborne jump over the highway - in front of a truck!