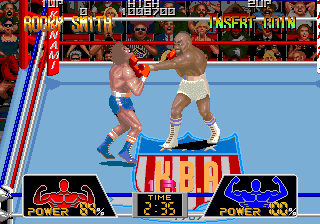 An excellent boxing game from Konami.

Hard Puncher was released in December 1988 in Japan.

The subtitle of this game translates from Japanese as 'Blood-smeared Glory'.

There are plenty of references to "Contra" such as Rocky Smith and Joe Vulcan looking similar to Bill Rizer and Lance Bean : Contra's 2 main characters. not only that, but one of the CPU contenders named Red Falco is a reference to what else? Red Falcon, the extraterrestrial arch-enemy from Contra.

Another of the CPU contenders, Iron Drago is a spoof of Ivan Drago, the boxer from the 1985 film 'Rocky IV'.

Finally, Black Stallion, the final contender is a spoof of Mike Tyson.

All these tricks work in Japanese version only, Hard Puncher!

* Unlock A Secret World : Begin a normal game. Then, at the opening blue screen, press Left, Right, Up, Right, Down, Right, Left(x2). If done correctly, a bell will sound. Now your rivals will be much harder and even deal special punches they didn't originally have. Also, you'll be able to string 20-hit combos on some opponents. Beat this game mode and you'll be awarded $20,000,000 instead of 10 (note : This code appears briefly on screen after beating the game in Regular mode).

* Unlock A Powerful World : Begin a normal game. Then, at the opening blue screen, press Right, Up, Left(x2), Down, Up, Right, Down. If done correctly, a bell will sound. Now knockdowns will occur whenever a punch is landed (like sans power in Mortal Kombat). Beat this game mode and you'll be awarded $20,000,000 instead of 10 (Note : This code appears briefly on screen after beating the game in Secret World mode).

* Moai Mask : Sometimes the referee will be wearing a mask of Moai, the stone head from Parodius and Cue Brick. I haven't confirmed what triggers this particular trick, but I think it could have something to do with the timer. -Maybe winning at 2 :22, 1 :11, or something like that-

* Alternate Credits Roll : Beat the game in New or Powerful World mode. When the credits roll, the names will remain the same but the titles will be different. 'Making of this game' is replaced by 'Staff of Conjax Pro'. Also, keep an eye out for a cameo by Pentarou the penguin from Parodius during either credits roll.

* The Mob Never Forgives : When you win the game and get the park scene, look carefully in the background to spot two hit men armed with UZIs and gunning down a poor guy. The girl next to him tries to run. Is this subliminal violence??

Game's ROM.
Excerpts of this page were taken/edited from X-Mang's Hard Puncher FAQ hosted at gamefaqs.com since 2000.