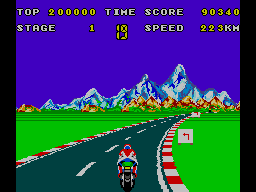 Hang-On Jr. is a point-to-point 3D racing game in which players take control of a superbike and must race over five twisting, road-based circuits, avoiding rival bikers and trying to reach each end-of-stage checkpoint before the time limit expires.

The game is a cut-down version of its legendary parent, "Hang-On", and while it features similar gameplay, it's rendered in more primitive graphics due to the vastly inferior host hardware. As with the parent game, collisions with roadside objects will see the rider thrown from his bike as the bike then explodes, costing valuable seconds waiting for a replacement to appear. Contact with rival racers should also be avoided.

A new addition from Hang-On is the presense of water puddles on the road, which slow the rider down. Any time remaining when a checkpoint is reached is carried over to the next stage. The game consists of two sets of five identical stages. Completing the first set (Novice) unlocks the second set (Advanced).