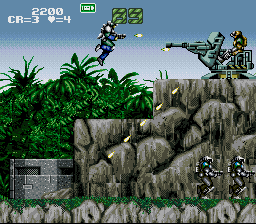 Gunforce is a side scrolling action shooter developed by Bits and published by Irem, and it is the conversion of the arcade game of the same name. In the year 2000, a mysterious alien organization and its growing army starts to invade others countries and to incapacitate their computer networks, thus compromising their ability to launch their own counteroffensives. As a last resort, the allied forces decide to dispatch an elite commando team called the 'GunForce'. Their mission is simple - take down the enemy command and communications centers and to ultimately destroy their massive sea fortress. Each soldier can shoot in eight different directions and is equipped with a basic rifle gun that they can later upgrade into more deadly weapons. The power-ups, usually left behind by defeated enemies or hidden inside crates, range from an Automatic Weapon, a Bazooka, a Flamethrower and a Laser. But each special weapon comes with a significant limitation - ammunition. Although the default gun grants the player unlimited ammo, all the others have a set amount of bullets. Furthermore, the soldiers can use a broad selection of vehicles scattered around each level (such as jeeps, turrets, helicopters or armored biped walkers) and devastate the enemy with far superior firepower. Additionally, Gunforce features a bit of a twist on the traditional Run'n Gun formula - enemies don't kill outright on contact (as they usually do in myriad of other action games), but only their bullets or vehicles do. Gunforce consists of five levels and also features a two simultaneous player mode.