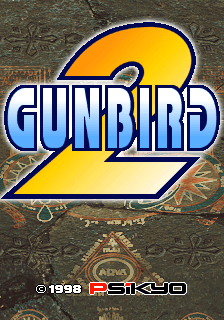 In this vertical shoot'em up, you have five selectable characters who fight the big army of pirates but this time to collect elemental potions. 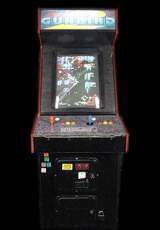 Released in December 1998 in Japan.

Aine originally appeared in "Samurai Aces" and as a hidden character in "Tengai" as Ayin. Here in Gunbird 2, he has quite a 'different' type of bomb attack :).

Gunbird 2 shares some similarities with the 1975 anime series 'Time Bokan':
* The flag symbol in Time Bokan is a clear skull and in this game is a 2P like a skull.
* The thin guy has a very ugly nose also a moustache and teeth like a rabbit (he is the same in the game and the anime).
* The fat guy has a beard. In this game and in Time Bokan, he has a semi-shaved beard (so with the exception of the beard, the guy is almost the same).
* The chief is a luxuriant woman (in the anime, she always was topless in the end).
* In Time Bokan, the bad guys always show a stupid new-robot to defeat the good guys. In the game is the same.

Note : There are 27 different endings!

The game forbids the initials 'SEX' on the high score table. If you try, it gets changed to three smileys.