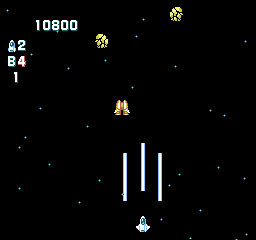 The most happening place in the universe is the trendy, upscale solar system of IOTA Synthetica, part of the Galactic Federation of artificial stars. It's as far from dirty old Earth as can be... But don't sign up to go yet! A strange cosmic energy field with a major attitude has engulfed the system, and the most outrageous things are happening. Ordinary inanimate objects are coming to life - harmless little animals are becoming rabid giants - and the freaked-out residents are under attack! The only Galactic Commander who can handle this ordeal is the eccentric renegade called Gun-Nac. He can oust this aura that's threatening the destruction of comfortable artificial life as we know it. But where in the universe is he? He could be as far away as Earth, searching for a new Game Pak. Commander Gun-Nac, if you read this, call H.Q., A.S.A.P., O.K.? We N.E.E.D. you!