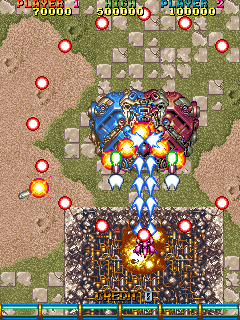 A vertically scrolling shoot 'em up from Toaplan.

Licensed to American Sammy for USA, to Unite Trading for Korea, to Charterfield for Hong Kong and South East Asia and to Anomoto International for Taiwan.

This game is known in Japan as "V-Five". Grind Stormer seems to be different in the way that you pick up the items directly and don't go through the power-up bar.

This would be Ikeda Tsunemoto's first game at Toaplan. He went on to become a founding member of Cave, where he still works as a lead programmer. It is due to him that the phenomenon of the 'Danmaku'; the huge walls of bullets seen in "Donpachi" etc, came about.