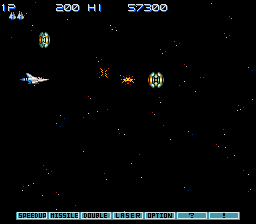 The Gradius III arcade game was originally released in 1989. This port of Gradius III shows significant differences with the original arcade game. The power-ups have been shuffled around and the Super Famicom port even features new and exclusive weapons (such as the Hawk Wind or the Mega Crush), and two extra option configurations (whereas the arcade game had only two on offer). Most of the levels have been edited and some of the enemies have been altered, or omitted. In the first stage, the sand lions were removed. The third stage has lost the large cave/maze section (and is therefore shorter) and the earthquake effect (screen shake) is gone. Then the short 3-D bonus section located right after the third stage was completely removed from the Super Famicom port. The forth Moai stage has lost the large heads flying towards the player, and the mini-boss Dogas was removed. The Moai boss is also different and features two large heads (unlike the arcade game which featured six). Then the sixth 'Cell' stage from the arcade was truncated and moved to the end of the game, so the fifth stage of the Super Famicom port is the 'Fire' level which was too, largely edited. The most noticable change is the loss of the large three-headed fire Wyvern that awaits the player right before the snake-looking Vulture Dragon boss. The sixth 'Plant' stage is fairly identical, except maybe for the last boss who has lost a couple of tentacles in the conversion. The seventh stage is in reality what is commonly called the 'High Speed Zone' (and which is featured a lot later in the arcade game), and replaces the Crystal stage from the arcade game (which was discarded). This 'extra' stage also introduces an exclusive boss called 'Beacon' not found in the arcade game. The eighth stage is the 'Boss Rush', and many bosses didn't make the cut, such as Lizard Core (from the Crystal stage) and Tetran. Most of the boss rush takes place on the surface of a pink asteroid which was replaced by a much simpler space background in the Super Famicom port. The ninth stage is the Mechanical Base, the small Shadow Dancers does not appear in the Super Famicom port and the battle against the 'Disrupt' sub-boss is overall easier (the arcade game has walls that shoot out of the ground and a lot more enemies on screen). 'Shadow Gear' also looks completely different and has lost four legs. The tenth stage is where the organic 'Cell' stage kicks in - it is overall a lot shorter than the arcade game.

* Extra credits: At the title screen, rapidly press X to increase the number of credits.

* Arcade mode: At the option screen, try to hit A sixteen times as fast as possible (it has to be done within one second which is rather difficult, use a turbo controller if you are not quick enough). If done properly, the Arcade option should appear in the difficulty level. Technically, this mode is just a super-hard mode.

* 30 ships: At the title screen, hold Left and press A three times.