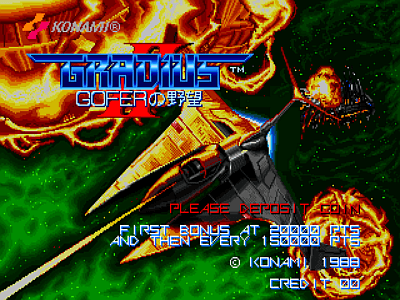 The third game in Konami's renowned Gradius series; the prequel being "Gradius [Model GX400]" and a spinoff called "Salamander [Model GX587]". Gradius II strictly adheres to the shoot-em-up template set out by its hugely successful predecessor, the game eschews the sideways/vertical scrolling alternate levels of Salamander and opts instead for Gradius sideways scrolling-only mechanic. This game is rightly considered to be one of the most demanding and difficult shoot-em-ups ever released.

Gradius II was released in March 1988 in Japan.

The title of this game translates from Japanese as 'Gradius II - GOFER's Ambition'.

This game is known outside Japan as "Vulcan Venture [GX785]".

A three-part Ova anime based on the Gradius series was released in Japan within a year after the release of Gradius II. It follows the adventures of Dan, Stephanie, and Eddie - Three ace pilots who hope to save their planet from the forces of the Bacterion empire. Later on in the series, they are joined by Lord British, the Prince of Latis.